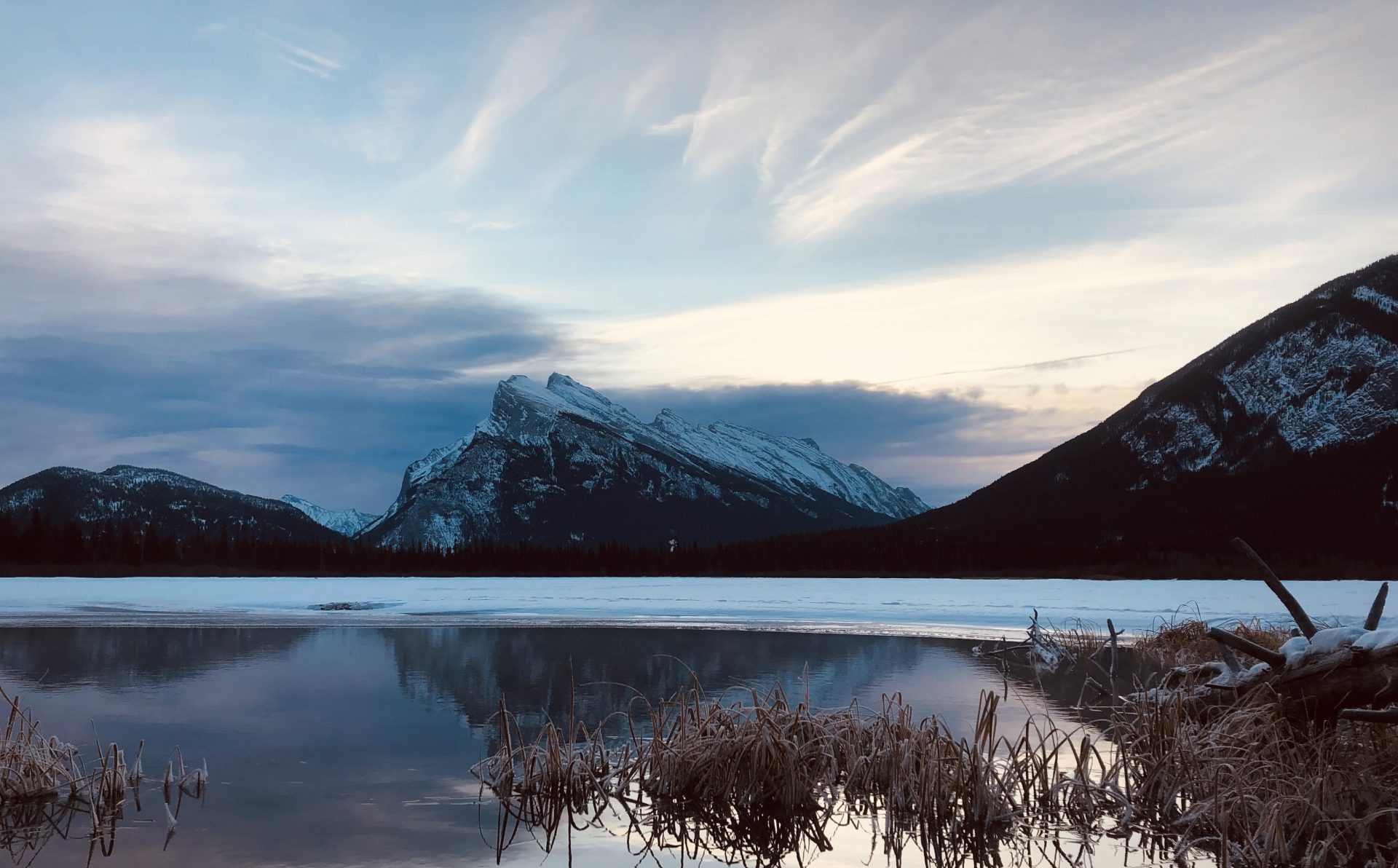 15 Photos to Inspire You to Visit Banff in the Winter

I know this will sound incredibly cliche, but is there any place more magical than Banff in the winter? The mountains and pine trees peak out from underneath a layer of snow; the crowds are present but much more manageable. Sure, many of the summer hikes aren’t available in the winter and you can’t exactly go backpacking, but there is more than enough to keep you busy.

And just to reinforce how spectacular Banff is, all of these photos were taken with an iPhone and none of them were edited in Photoshop/Lightroom. This is 100% Banff wintertime magic! 15 Photos to Inspire a Visit to Banff in Winter

In the winter, there is no better place to catch blue hour than Vermilion Lakes.

My first morning in Banff I was greeted by the best blue hour I have ever experienced. I routinely alternated between stuffing my hands in my pocket for warmth and pulling off my gloves to snap yet another photo. One great thing about visiting Vermillion Lakes in the winter is the lake itself is frozen. You can step onto the ice and capture beautiful reflections in the pools of melt water. (Please be careful when walking on ice.) There is no better place to catch the sunrise, either.

Following blue hour was an equally striking sunrise. Vermilion Lakes is a popular destination for sunrise (you can understand why), yet you won’t find serious crowds here in the winter. Both mornings I went to Vermilion Lakes and nearly everyone there so early in the morning was a pro photographer (well, other than me) and all were quiet and respectful, allowing each other to enjoy the sunrise peacefully. A visit to the frozen Lake Louise will leave you breathless.

And if it’s an especially chilly day you’ll be breathless for two reasons. Lake Louise has long been regarded as a heavenly wonder, a place so gorgeous you have to pinch yourself to ensure you aren’t dreaming. Lake Louise was originally named Lake of Little Fishes by Stoney Nakota First Nation, but was later named Lake Louise after Princess Louise Caroline Alberta (another fun fact: the province of Alberta was also named after her). A drive along the Icefields parkway is as beautiful as it is nerve-racking.

At least if you’re like me and don’t drive with snow tires. Huge mistake – but, as you can see from the photos, most definitely worth the occasional mild anxiety attack. (In all seriousness, get a rental car with snow tires.)

If you drive north on the Icefields Parkway, you’ll actually find yourself in Jasper National Park. With a single weekend, you likely won’t have time to venture too far into Jasper, but a short drive on the parkway will give you a taste of magical scenery. Another source of nerve-racking anxiety – you will frequently drive by Avalanche warning signs. I don’t know if there is anything to prevent one (maybe don’t yell or fire Mulan-style cannons into the mountain) but they’re fairly uncommon from my understanding.

Read more: How to Spend a Winter Weekend in Banff Winter or summer, every sunset is spectacular in Banff.

There are few places with sunrises and sunsets of equal beauty. Personally, I think Banff is one of those places. I love how the soft golden hour light falls on the mountain sides, illuminating the pine trees and brightening the rock. Lake Minnewanka, meaning “Water of Spirits” in Nakado, is a great destination for a sunset (as seen in the following photo). Alternatively, Two Jack Lake is a good bet as well (the following two photos). Banff in winter is quintessentially Canadian.

You’ll find people ice skating on Two Jack Lake, playing hockey on Lake Louise, building snowmen and enjoying a warm beverage while snuggled up by a fire in a lodge. In a country that gets two months of reasonable summer and six months of reliable snow, we know a thing or two about fun in the winter. Throughout Banff there are options for cross-country skiing, snowshoeing, dog sledding (don’t dog sled here though, dog sled in Nunavut), ice climbing and more. Visiting Banff in Winter for yourself

Transportation: Your best option is to rent a car in Calgary. From there, Banff National Park is a little more than an hour’s drive. Having a car will be especially important when you are navigating to the various lakes and viewpoints throughout Banff.

Where to stay in Banff

Hostels: There are accommodation options for all budgets in Banff. For backpackers and those with smaller budgets, I have stayed both Banff International Hostel and Samesun Banff (both located in the town of Banff) and the Hostel International in Lake Louise. I personally preferred Samesun Banff because it had a more welcoming common area and bar, but all were clean and comfortable.

Hotels: There is an overwhelming number of hotels in Banff. In terms of quality and service,  Moose Horn Lodge is supposedly the best whereas Tunnel Mountain Resort is the best value for money. Full disclaimer though – I haven’t stayed at any of these myself.

Luxury: If you can afford it, stay at the Fairmont Banff Springs. HOLY MOLY is it luxurious. So many celebrities and royal family members have stayed there, and the spa pools are exquisite. If you can’t afford it $850 per night (I sure as heck can’t) I found a hack to get a room for $220 and I’ve written about it in this blog post.

Read more: How to Spend a Winter Weekend in Banff

An Outdoor Getaway to The Bay of Fundy

How a series of misadventures landed me in...

How to Spend a Winter Weekend in Banff

Stranded in a forest without cell service (and...

The Rockies to the Yukon – Part Three...

Welcome to Voyageur Tripper, a blog dedicated to outdoor adventure - for those of us who aren't NatGeo explorers. A wilderness guide turned corporate consultant, I write resources and travel stories to help and inspire others to get outside more. Read more on my About Me page.

This website uses cookies to improve your experience. We'll assume you're ok with this, but you can opt-out if you wish. Accept Read More